We resolve some of the most common issues--Stress.
time constraints.unwanted weight gain. mental defeat.

With more than 30 years of experience as a boxing and strength & conditioning coach, Emile will hold you accountable to your targets and goals. “I make a personal commitment to each and every client to ensure they reach, and even surpass, their individual fitness goals,” says Coach Emile, who began his own athletic career in track and field.

While competing in the triple jump at the 1996 Olympic Trials, the All-American athlete suffered an injury that made him refocus his energies on boxing. After a brief stint as an amateur, followed by a couple of professional bouts, Emile turned his attention to training fighters through his business, The Boxing Loft.

In 2008 and 2011, coach Emile trained Metropolitan Toronto Police, 51 Division Street Crime Unit and the Major Crime Unit & Community Response Unit for the Toronto Police Fight Night. He worked with Missy Peregrym, the Canadian actor who starred as Officer Andy McNally on the ABC and Global Television Network series Rookie Blue, along with a few other actors on the show, and her stunt double, Bernadette Couture. He also coached and prepared Peter Mooney (Officer Nick Collins) for an episode of Rookie Blues’ rendition of Toronto Metropolitan Police’s Fight Night.

Coach Emile has done it all while employing a soft-spoken and compassionate attitude towards all his clients. “I train athletes and adults of all abilities and all ages,” says the Parkdale-based coach. “Even for those with time constraints, or are brand new to exercising, I’m constantly developing unique workouts to suit their needs and to help them turn their goals into habits.”

If you’re an athlete looking to improve your speed, explosiveness and power from the ground up, or want to develop more mental toughness, click the below link.
Elite Athletic Performance Coaching 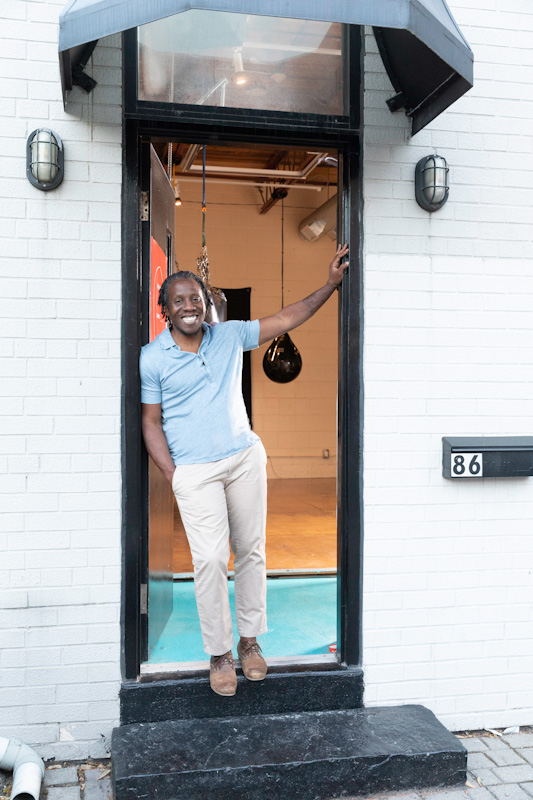 Boxing is our forte, but it’s not all we offer at The Boxing Loft. Our primary offerings are: 1) Book a time slot and work out on your own, 2) virtual coaching using our online platform, Coaching On-Demand 3) In-person training with Coach Emile Reed (a variety of training options, as outlined below)–And we now bring the coach to you through our reliable mobile service (inquire using the contact form). A monthly membership is required for in-person training.

Our Coaching On-Demand’s virtual platform serves you well if you prefer to train independently but want a plan of action. It consists of video-instructed coaching that provides: Conditioning for health; boxing fundamentals; footwork drills; meditation; injury prevention; and results-driven exercises and workouts – we walk you through each exercise/workout with a focus on form and safety. It’s like having your coach in the palm of your hand so you can train wherever you are.

If you have further questions, please send us a message by filling out the contact form (scroll down).

All memberships and training packages are month-to-month. Missed classes and sessions are forfeited unless rescheduled.

How Does The Boxing Loft differ from kickboxing and box-fit classes?

It’s not like a cardio fitness class. Instead, we focus on proper punching mechanics, footwork, defense, boxing-specific conditioning, and all the fundamentals of the sweet science.

Do I need prior boxing experience?

Not at all. You do need to start with Intro Boxing, though, to prepare your body for boxing training camp.

Do I need my own equipment?

How often do you recommend I come?

It takes about six months to learn a new skill, so we recommend that you train at least twice a week – three times is ideal. Our brains build neural pathways: the more we practice a skill, the more the neurons wire together, called neuroplasticity. Eventually, it gets easier and easier to perform the skill set.

What payment forms do you accept?

You can pay by cash, e-transfer (send payments to info@theboxingloft.com), or credit card.

What People Say About The Boxing Loft

Training with a coach at The Boxing Loft has helped me get in the best shape I’ve been in years. At first, all I wanted was to try something new. Friends suggested yoga, but I wanted to try a workout that was outside the box – something easier to prepare for than running or biking, especially as winter was coming on. Coach E’s program has peaked my interest in boxing, helped me become more mentally and physically disciplined, and provided me with a laundry list of workouts I now do almost daily at home in tandem with my training sessions.
-Kevin Younge

Coach Emile brings a true passion to both developing athleticism and technical excellence. His strength and conditioning work is both broad
including not just power and endurance, but speed, balance and coordination – and sport specific.
Training with Coach Emile at TBL has taken my conditioning and my skills to a level I couldn’t have imagined before working with him. Highly recommended whether for general body transformation, sport specific strength and conditioning or to learn true boxing skills.
-Chris Flynn

The Boxing Loft was exactly what I was looking for in a small, focused, local gym. Great for conditioning and boxing training. The workouts are rigorous and the coaching is attentive – great value for all levels. Highly recommended.
-Nicole Fowler

I signed up with Coach Emile because I was suffering from severe back pain. I soon realized that he customized his workouts to make them challenging but not so difficult as to be discouraging. And the back pain has never recurred.

I’ve now been training with him for ten years and credit him with helping me achieve my best level of fitness in many years.
-Ian McPhail

I, 100% recommend Coach Emile to anyone who needs help and inspiration to make a healthy change in their life. He knows how to cater your training to fit your physical challenges as well as offering programs to help develop endurance, strength, and most of all, healthy nutritional choices. For those who are ready to make a solid change for their overall health, Coach Emile is your answer.
–Tony Cancellara

Boxing is an incredible way to train your mind and body, and if you’re serious about putting in the effort, there’s no one better than Coach E to deliver results! He trains you the same as he would a fighter – and it’s awesome. If you’re anywhere near Liberty Village in Toronto go try a session – you won’t be disappointed.
– Katya Forsyth

Make yourself a priority!
Fill out the form below. We’ll get back to you as quickly as we can.